The McCains’ Other Nov. Decision: Selling the Family Bud Distributor?

By David Kesmodel
Quoted From: The Wall Street Journal
Back to News August 5, 2008

Sen. John McCain’s wife could face an emotional choice come the fall: whether to sell her family’s 53-year-old business.

If her husband wins November’s presidential election, Cindy McCain may come under pressure to sell Hensley & Co., the lucrative Phoenix beer distributorship she inherited from her father. That is because the alcohol industry is heavily regulated by the U.S. government, posing potential conflicts of interest for a McCain presidency.

Political analysts yakking at a bar could debate the conflict-of-interest question until the beer turned skunky. But what if the would-be first lady—who has sported “MS BUD” on her license plate and takes great family pride in Hensley—analyzed the issue from a purely financial perspective? Would this autumn be a good time to sell?

Yes, yes, yes, say industry insiders. Even now would be great, they say, though the McCain camp has indicated that no decision would be made until after the election. “If I were advising her, I would tell her this is the time to get out,” says Michael Mazzoni, an industry consultant who brokers sales of distributors. “I’m working on a half-dozen deals right now, and prices have never been higher.”

One reason for the hefty prices is some large distributors are in the process of consolidating the industry, seeking greater economies of scale, which makes big, profitable concerns like Hensley highly desirable. Consolidation is being spurred in part by high fuel prices, which wreak havoc on distributors’ bottom lines.

Yet another reason to sell is the potential for worsening industry economics. Distributors are about to pay more for beer from the big U.S. brewers. Anheuser-Busch—Hensley’s supplier—is raising prices to counter rising costs for raw materials. That might pinch sales volume. Distributors also wonder whether Belgium’s InBev, which recently agreed to pay $52 billion for A-B, will saddle distributors with more of the costs of marketing Budweiser and Bud Light.

Another reason many distributors are exploring whether to sell is they fear the Democratic candidate, Sen. Barack Obama, will beat McCain and raise the tax rate on capital gains from such transactions, says Joe Thompson, president of Independent Beverage Group, a leading broker of distributors. (The current capital-gains tax rate is 15% under the Bush tax cuts that McCain opposed and now supports. Obama has proposed raising it.)

Both Thompson and Mazzoni say Hensley, which sells more than 23 million cases of beer annually, would fetch a price of about $300 million. Cindy McCain, Hensley’s chairwoman, owns 34.2% of the company herself, and roughly 33% is owned by her relatives, according to records filed in March with the Arizona Department of Liquor Licenses and Control. (John McCain has no stake.) 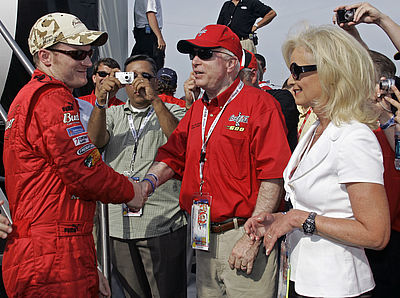 Bob Delgado, Hensley’s CEO and owner of about 21% of the stock, is a possible buyer of the McCain family stake, perhaps with an investment partner.

Neither Hensley officials nor a McCain spokesman could be reached for comment.

Hensley is a fetching property because it is the third-largest A-B distributor in the U.S., controls nearly 60% of the Phoenix-area beer market and is in a growing part of the country, though lately beer sales have been hurt by the sagging housing market and tougher Arizona laws governing immigration.

A-B has the right to approve any buyer of Hensley, which could limit the pool of potential suitors. “We recognize and respect a wholesaler’s desire to get the best available price,” says Dave Peacock, the brewer’s vice president of marketing, in an emailed statement. “At the same time, our ability to successfully market A-B products is dependent upon the financial, marketing and other qualifications of any prospective purchaser.”

In Arizona, the brewer may have the ability to buy the distributor itself, Mazzoni said. But it is unclear whether A-B’s parent-to-be, InBev, would be interested. InBev declined to comment.

If McCain loses the election, Cindy McCain might hang onto the distributorship for a long time. “It would be a very emotional decision for her to sell that business,” Thompson says. “She’s very passionate about it.”